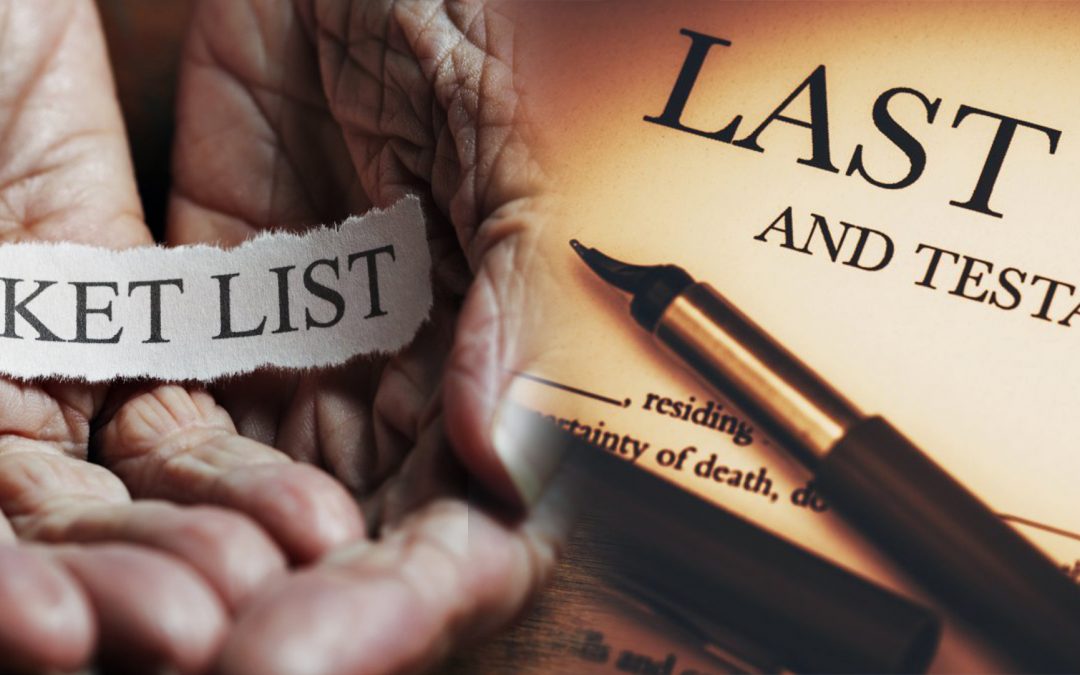 In mid-May 2022 our family lost someone dear to them, a life-long public safety servant, former military and police officer, who closed out his 40+ year tenure to public service as a  9-1-1 dispatcher. He was happily enjoying his retirement for the last 6 years. The family found tax records neatly in place spanning the past 10 years.  They found photos, finances, every document neatly organized and filed, even grade school report cards from his children, now in their 30’s.  What they did not find was a Will.  At 67, he was not expecting his death to occur so quickly and so fast and despite promptings to have one, a Will was never created.  It’s not that he thought he would live forever, he just hadn’t planned on going so quickly.

Preparing for the day when you will no longer be breathing air on this earth may seem daunting, one of my dad’s favorite sayings is, “It’s a good day as long as I’m on this side of the dirt”.  Creating a Will and/or Estate planning  may seem like something you shouldn’t have to worry about “right now”. It’s not going to be your problem, it will make death feel too real, or why should I care, I’ll be dead, may seem like legitimate excuses to wait.   The challenge with this thought process is that if you haven’t planned for the day, by the time the day arrives, it will be too late.  My mom was a 9-1-1 dispatcher for 10+ years, and knew the importance of planning for the final day.  She and my dad have been preparing for the day they take their last breath for several years with a trust and all final burial expenditures prepaid, they even have their headstone placed with names and birth dates (hard to see, but they insisted).  They have explained over and over that they don’t want that job to be harder than it already will be by not having their household and other affairs in place

There is a significant amount of controversy on the life expectancy of public safety employees after retirement.  In studies released in the late 1990’s, the average officer death was 59 or roughly 5 years after retirement.  A report released in 2019 by Dolan Consulting group shows that law enforcement officers live on an average of 6 years beyond retirement. Other studies indicate no significant difference between police and geographically similar working populations.  An additionally located study, released in 2016 by the National Library of Medicine, backed by the 2019 Dolan study, indicated that a police officers’ life expectancy in comparison to the general population is “21 times larger in years for potential life lost than that of the general population”.  Shorter life expectancy is theorized to be related to a career filled with stress, shift work, continued short staffing rates, hazardous environmental work exposures, and obesity.  The study reported that law enforcement saw a significantly increased proportionate mortality ratios for heart disease, digestive and skin cancers, and skin disease.  The study indicated that law enforcement have a higher rate for all causes of death combined with an average death of 66 years of age for officers with 10 – 19 years of service.  Crazy as it sounds, police officers who retired during a 33 year period were more likely to be alive than other state employees used in the study. My personal (no data backing) hypothesis is that by the time you’ve passed the 20-year mark in your career, you have a better handle on how to keep your health (and sanity) intact. There’s a lot of data on law enforcement, how about those working in 9-1-1?  An article released by officer.com in 2019 reported that as 9-1-1 Dispatchers, not only are the typical lifespan adversities faced, but the cumulative stress of being first responders is a factor as well. No in-depth study was located as to the specific life expectancy for those in 911.

You might be thinking at this point that this article has too much doom and gloom, but don’t stop reading yet, because wait – there’s more and it’s not all bad!

The first good news is that not all public safety personnel experience a shorter life expectancy.   In February 2022, the National Institute of Corrections released a statistic showing that there were no occupational risks associated with being a correction officer in terms of reducing life expectancy.  In addition, the firefighter insiders publication released a recent statement indicating that while firefighters have a higher risk of cancer (“significantly higher”), their average life expectancy is no different than anyone else.

How does all of this tie together?  There is a poem written by Linda Ellis called The Dash.  It focuses on what matters is not when we die, but how we live and love, how we spend our dash – as in the years between birth [dash] and death.  This analogy is so fitting here, because taking a few hours before the end of your dash to ensure your wishes for your family are carried out is a drop in the bucket of time.  While it’s true, you will never get those hours back, the fact that time was carefully spent making sure financial and other matters are covered will impact your loved ones when you’re gone. Serving the public is a grand statement for our dash, this is just a small task to complete to serve our family as well.   Each state responds to a no-Will death slightly differently, it’s known as dying “intestate”.  No matter what state the death occurs in, when a person passes without a Will or beneficiaries, all the property must go through probate and the property is then given to the heirs as determined by the law unless the heirs have agreed to a different distribution of property.  Probate is a legal process and having an attorney is strongly recommended, especially if there may be a dispute.  Legally speaking when there is no Will and no surviving partner (spouse), the children of the deceased will inherit the whole estate, regardless of the worth, followed by grandchildren, then siblings.  With no Will, the attorney also gets a piece of the estate as does the State.

There are so many threats facing those who serve the public even beyond health issues, having a contingency plan for your loved ones and them for you when, not if,  the unthinkable occurs is a critical part of living.   Creating a Will does not have to be a daunting task.  There are a wide variety of step-by-step Will makers online that once created and printed, can be signed, and saved.  Another option is for an attorney to be hired for estate planning, creating a plan for a Will or Trust, and assigning a power of attorney.  A thorough document could be 25 to 50 pages depending on the complexity of your wishes.   An attorney may provide you with everything you need in the basic document and then recommend a hand-written document (signed and dated) for specific wishes such as, “Richard inherits the shotgun”.  While writing the intended person’s name on the item is helpful, it still needs to be listed in the Will.  If there are changes in the Will after its inception, a simple handwritten and dated document with the changes is sufficient for most states.

A document with your last wishes, health advocate, and executor, would also be helpful, even critical.  In reference to the recent death, I sat helplessly by and watched the immediate family sift through documents trying to see if there were any instructions on last wishes, funeral and burial preferences, beneficiaries on saving and checking accounts, vehicles, and other financial documents.  In all of the neatly organized papers, surely, they kept thinking, something will be here, but it wasn’t.  Not only was the process brutally hard because of the unexpected death, but not finding anything to help with the decision making was heart wrenching.  During the two weeks between the news of the sudden illness and funeral, I took dozens of calls and text messages from the immediate family, “I’m so overwhelmed” was the term that was repeatedly used.  Overwhelmed, because a simple document was not created.  Overwhelmed because there was a sudden unplanned trip to a different state for the family, and the expenses that were incurred from that non-vacation trip were high.  Overwhelmed because the process of preparing for a funeral and sifting through pictures (which ended up numbering in the hundreds), while trying to dispose of the personal property was daunting.  Each of us ended the two weeks vowing to go home and start shredding or burning old papers, digitizing photos, and the most important thing, getting a solid estate plan in place.

Here is some good news, while developing a Will should be a priority for your family, combating the averages regarding mortality is a simple, but intentional task.  For the years spent on the road or under the headset, our bodies have functioned in a constant flex of survival mode.  The brain senses danger, real or perceived (on the phone through vicarious trauma) and reacts.  It dumps in stress hormones, adrenaline and cortisol to make you breathe faster, trigger the release of sugar and fat into the blood for more energy.  Your heart beats faster and your blood pressure elevates until the brain senses the moment has passed and returns to normal.  This response puts your body through phases causing the dangerous and sometimes lasting effects earlier highlighted.  High priority calls for service for all first responders can occur several times throughout one shift, thousands of times throughout a career.  The Harvard Health reported that by using relaxation techniques, (deep breathing and meditation), eating well, sleeping enough, healthy activities (like exercise), talking to support people and the strongest protective factor, positive relationships, will help combat the chances of an earlier death.

Life is not guaranteed, none of us will live forever, the Pandemic should have taught us that many people lost previously healthy family members within days of them becoming ill. The fatal car accidents public safety responds to, on an average of 90 per day in the United States, should teach us that sometimes people take a quick trip to the store, never to return.  What final act of love will you do to help your loved ones through the grief process when death knocks at your door?  Will you (and your significant others) get your paperwork in order, create a valid Will, assign beneficiaries, provide your last instructions for your surviving loved ones, and will you name the persons you want to finish raising your children or even pets once you’re gone?  Or will you wait just a little longer because it feels too real, joke about it not being your problem, and feel that in the end, it doesn’t even matter because you will be dead. Like all the decisions in life – the choice is yours.

Cherie Bartram is not an attorney and encourages all who are in the position of needing final documents such as a Family Trust or Will, to seek legal advice.